(We brought you the story of Chesie Hill last year July, an amazing dancer and teacher  leading the way in modern wheelchair dance. She has  released loads of youtube videos showing her moves. Below is an update of what she’s been up to. WDSA UK).

No can be a very powerful word – a debilitating excuse or a form of self-protection, but for Chelsie Hill it has never been a part of her vocabulary. As a self-described “yes person”, Hill has always strived to be better than she can be, especially when it comes to dance.

Hill began dancing almost as soon as she could walk and never really stopped. Yet, her entire life changed just a few months before from graduating high school. At the age of 17, she was in a car accident, which left her a T-10 Paraplegic. When the reality set in, Hill didn’t let the word no stop her from continuing to pursue her passion — she just found another outlet for it.

She teamed up with her father to start a nonprofit, the E.P.I.C. project (Empowering People In Chairs), which aims to inspire those in similar situations. Hill also created one of the biggest wheelchair dance groups in the world, known as the Rollettes, which empowers other women in chairs and promotes the love and passion of dance.

From the power of social media to her new business ventures, Hill is busy making a difference. In our full interview, Hill talks about the power of a single word and how it has completely changed her life. Check it out below! 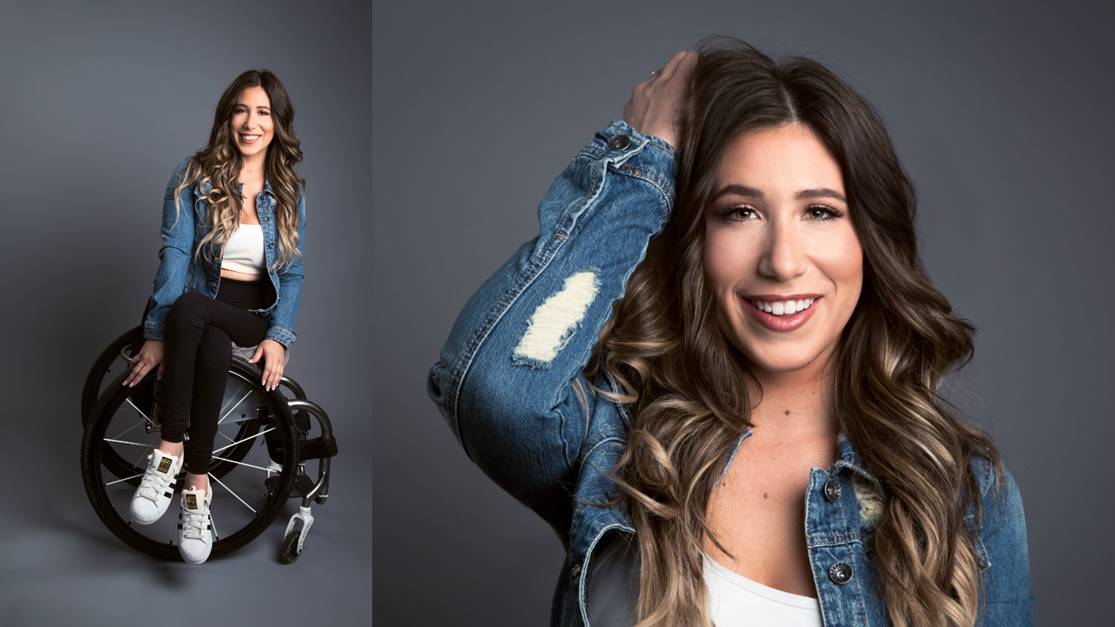 What inspired you to create E.P.I.C?

When I was in the hospital, my dad and I were talking at 2 a.m., and it was one of the nights I could not sleep. I was crying to him and asking why this had to happen to me. He suggested that maybe I was meant to start a nonprofit and help people get wheelchairs. I remember looking at him and asking, “really, I could do that? I could impact someone’s life like that?” He tells me now that he was just grasping at straws, but a year later, we got our status to become a nonprofit and started the Walk and Roll Foundation. After four years, I decided to trademark it, but we weren’t able to, so we switched it to the EPIC project, which stands for Empowering People in Chairs. Then in 2012, I started the dance team, the Rollettes, and it has grown so much.

What is the mission of the Rollettes?

What we want to do is break down the stereotype of people in chairs. We want to show that dancing is done whether you’re walking or rolling. We also hold dance intensives. We have girls from all over the country fly in, and we hold a 2-3 day dance intensive. It’s about dance, but it’s more about empowering other women and empowering ourselves as people who have gone through a post-traumatic change. We’re now going to be performing at Red Bull’s Wings for Life, their big fundraiser they do every year. We just want to show that dance is dance whether you’re walking or you’re rolling and to not be afraid to say hello to someone in a chair.

What is your favorite thing about dancing and how do you bring that to your project?

My passion for dance has always been there. There are a lot of things I can’t do anymore when it comes to dance like leaps, jumps, turns, kicks, layouts and flips. But I’ve found a new passion for dance. I love dance so much more now because I see it for more of the passion rather than just what my body can physically do. One of the girls on the team, Edna, I met her three years ago, and she was so shy.

She never really spoke and was very timid. I’ve gotten to know her, and now she’s a business owner. She’s branched out and become more confident in who she is. To be able to show people that and to make our situation more normal is one of the biggest things I feel so blessed to be able to create. Another girl who came through the project, we met five years ago when we were first injured, but our friendship is bigger than anything I ever expected because we have a support system within our team, but we’ve also become sisters. It’s become more than just dancers.

How did you build up the courage after your accident to continue to inspire people out there to do what they love?

When I was injured, my entire community stepped forward and did fundraisers. They really embraced me and my situation. The reason that I am the way I am is because my mother and father they didn’t ever let me say no. I look back and I’m like, ‘wow, to not have the word no in my vocabulary and have to figure out how to do things’, I never really said no. I think that’s huge when you’re injured to take opportunities as they come.

You have this exciting new jean line coming out. What are you trying to accomplish with this new brand?

A lot of people ask me if I am self conscious, and of course I am, I’m human. The thing I’m most self conscious about are my legs because I’ve lost so much muscle, and since my muscles don’t contract, I can’t build them back up. I’ve always struggled with how to find jeans that fit me best with my legs. I have a friend that I met a year and half after I was injured, and he has a jean line.

I kept in contact with him and finally last year, I told him I needed jeans, women’s jeans that worked for me, and he asked if I wanted to help him out. Long story short, I’m in charge of growing the women’s side of his company.

I design, and meet with the designers and manufacturers for the jeans. I’ve taken my first photoshoot for the company and during it, I was thinking to myself about how self conscious I used to be about my legs, I never really faced it, but there I was taking pictures of my legs. Once I embraced what I couldn’t change, so many doors have opened up not only in the jean industry but in life.

How are using social media to connect with people?

You can reach so many people across the U.S. who are going through the same thing as you, and just by posting a single picture, you can make someone’s day better. It’s awesome to be able to motivate people. 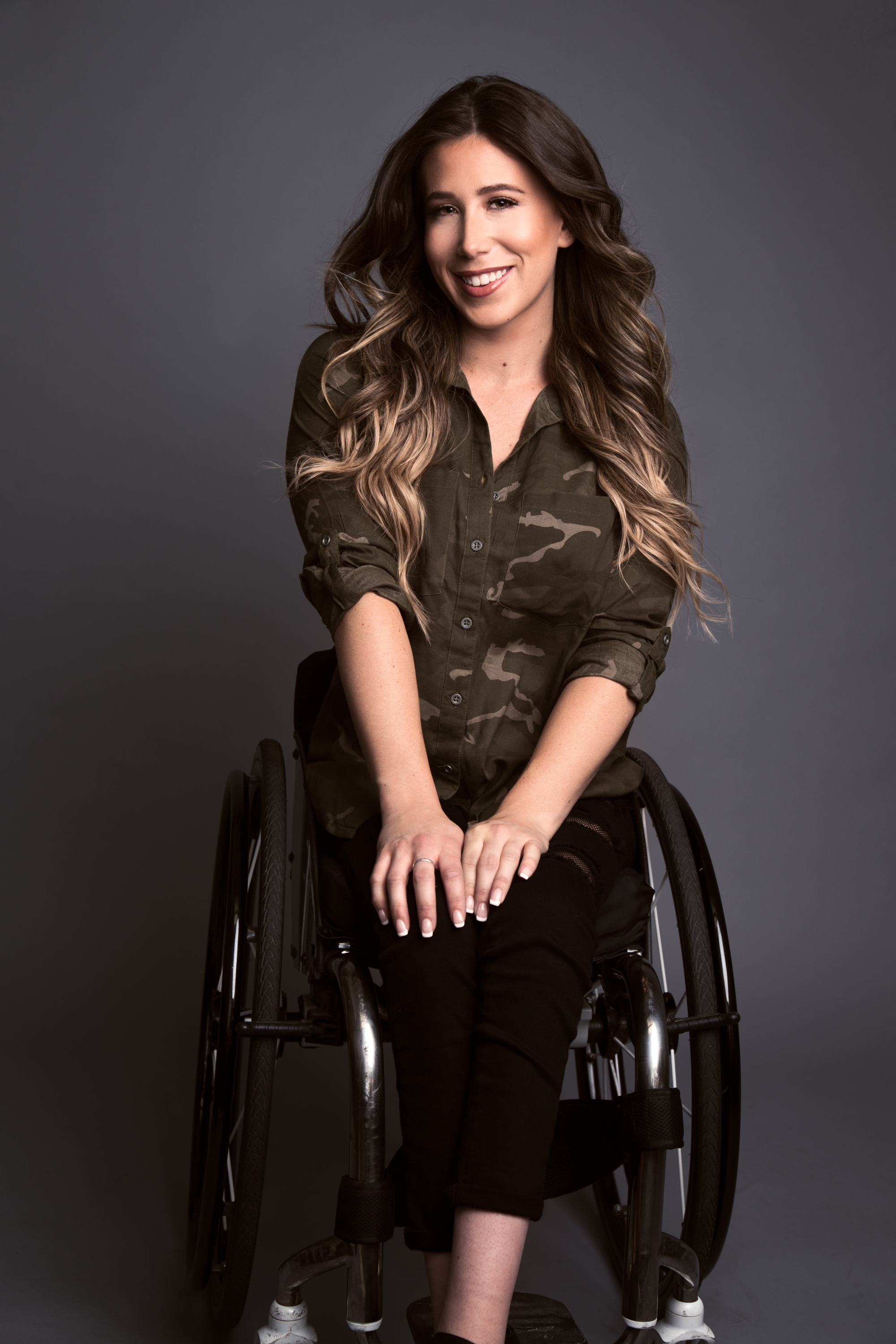 What advice would you give to people who have a physical or mental disability or a struggle they deal with everyday?

I’m always more geared toward telling people to say yes more because you’re never know where it may lead to. You never know how it might affect you in the long run or how it may make your life easier. So I always tell people to say yes more and be aware of what you take into your body. I’ve learned so much with my injury about functioning and what makes me feel better with the food I eat. That has made a huge difference on my overall outcome of a day.

What is the best advice you’ve personally received?

Being more of a yes person. I wouldn’t have had or done all of this if I hadn’t said yes. I wouldn’t have had this dance team if I didn’t listen to other girls coming to me saying they wanted to dance. If I didn’t say yes, I may not be where I am today. I feel so blessed to have such positive support systems so early and have such an amazing team to keep going.

What has been the biggest thing you’ve learned in the past six years?

I’ve always kept myself so busy so I never had time to be sad. I had a family who never let me fall, but I’m human. I’ve had my moments, but I take very seriously what people feel for me. I would never want to let those people down to where I never showed up to an event or I didn’t care. I’ve held myself to my own standard of keeping myself going for not only myself but for the people around me.